It’s almost time for the spazzfest known as Harry Potter and the Deathly Hallows. Can you feel it?  Can you hear the music in the air?  Or is that just me and the voices in my head?  Don’t answer that.

Well, it’s time for this lady muggle to get out the cra-zay and analyze the living shizz out of all things Harry Potter.  Man oh man am I excited.

It’s actually kind of pathetic if you think about it.  I mean, I’ve read all the books.  I’ve seen all the movies ten billion times.  I obviously know what happens.  But it’s like I’m on the edge of my seat.  It’s like I have no idea what’s coming.  It’s like I’m thinking, how in the world is this going to end????? Which is weird, cos I know. But the previews come on and I yelp and start to act all cooky (sort of like all the old ladies do when they see Jacob in all the Twilight Saga previews, only not totally gross).

I think it’s because deep inside I believe they (who is THEY anyway?) have done a bang up job on these films.  They’ll never reach the heights of Rowling’s amazing books, but they touch the right chord, are well cast (the casting directors are SO hired when me & Vee take over the world); the imagery, the dialogue and the finer details (right down to every note of music) play to the heart of what the Harry Potter series is about and what fans should expect when they see a beloved book series turned into a film (take a lesson Summit Ent. and esp. Catherine Hardwicke.  I don’t mean to be catty, but the awkward, grey monstrosity that is the original Twilight film almost pierced my eyeballs with its stark raving stupidity).

Still, if I could make any changes, here’s a few:

1.  Lord help me.  I love me some Brits.  But there must be something wrong with me cos sometimes I can’t understand what they’re saying.  Like, maybe I’m so focused on how brilliant they sound and I’m wishing I sounded half as smart as them that I miss half the dialogue. Also I think I miss alot of Rupert Grint’s lines because I’m always laughing at the awesome facial expressions he makes (Ron, never, ever change those.  I love ’em). 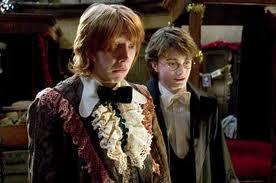 The many (odd) faces of Ron

2.   Sirius Black- I kind of have a minor crush on Sirius.  Like, siriuously.  And then Casting People (I won’t hold it against you. I promise),  you went and placed Gary Oldman in the role of Sirius. I feel really bad saying that because I like Gary Oldman.  He is an amazing actor.  He was a fantastic Lee Harvey Oswald.  He was a great Dracula (duuuuude, even Keanu would agree), and he kicked major bootay as the dreadlocked pimp in True Romance.

Awesome pimp. But not my vision of Sirius Black.

It’s not that he’s bad as Harry’s godfather (he’s quite good), I just pictured Sirius, well, about a thousand times hotter. And I know he’s been through the ringer in Azkaban. I know he’s been around the block, but somehow I imagined his looks to be of a level that even when looking haggard he out hotted the other guys.  I mean, I even thought the sketches of him on some of the chapter headings were really cute.  This, of course, is evidence of how completely nutters I am (do you like how I threw in a British/Harry Potter word?).

3. They cut out my favorite kissing scene.   You know when Harry wins the quidditch match and bursts into the Gryffindor common room, walks over to Ginny and plants one on her? I love that part.  In books with little to no swoon, I eat up moments like that.   So sue me.

Where DID I put my nose? I had it last night.

What exactly happened there?  I get that he is evil personified and that he is so terrible that he is now physically distorted.  I’m not opposed to his face in general, but why does he essentially have no nose (his nose looks alot like Snow White’s)?  Was it crushed in some kind of battle?  Is it flattened by his pure evil?  Did he have some bad rhinoplasty?  All I know is AGAIN, Tom Riddle is supposed to be a handsome little devil (double true on the devil part) and now he’s Mr. Face Smash. I don’t expect him to be a looker anymore, but I don’t understand why evil=no nose.

You are Harry Potter, The Boy Who Lived.   I want to pat your little head while I say “run along outside and play” not “put your freaking clothes on!”  Jeesh!  Put your freaking clothes on!  And stop growing up!  (Ok, it really has nothing to do with the movies, but still disturbs me to no end, as did the Google Image search for this picture.  Let’s just say, not everyone chose to cut off the picture where this one did and I got waaaay too much insight on Mr. Radcliffe and his wand.  Ew).

But you know what they do right in these films?  Everything else.  I love them.  I can watch them one hundred times and love them more every time.  Like, me and these movies should get a room—that is how deep the depths of my love go.

So spazz with me.

I get chills every single time I watch it.  Is is because I’m a huge, massive loser?  Probably.  But at least I’m not this guy.  I am SO there November 19th.  Can’t wait.

8 thoughts on “Get Me a Butterbeer, Stat!”