2010 is coming to a close, which means I’ll be getting glammed up in a gorgeous dress and hitting the town with my handsome hubby so we can party the night away with dancing and champagne.

OK, so maybe not.  We’ll be at home in our pj’s playing board games with the kiddos while watching The Sound of Music. And if things get really wild we’ll head outside to have a midnight toast with the neighbors, but whatever.  The coming new year signifies a time to reflect.  Many choose to think on how they’ve grown in the past year and what goals they’d like to set for the coming months. Or they review failures and look for a way to rectify those.  Not me.  I dig deeper than that.  I want to blab about books.

Thanks to this survey at The Perpetual Page Turner, we’ve compiled a list of some of our favorite (and not so favorite) reads of the year.

Hands down, Jellicoe Road by Melina Marchetta. I picked this one up eight months ago and am still blown away by it.  The story is fantastic, the writing is beautiful and…three words…Jonah Effing Griggs.  Nuff said.

One of the better "grown up" books

I’ll be honest.  I had a slow year in the adult fic category.  Usually  I read several…but sweet holy moly! There were so many amazing young adult novels making goo goo eyes at me from the shelves of my local library that I just didn’t have time for much else.  Of those I read, Never Let Me Go by Kazuo Ishiguro had the greatest impact on me.  Ishiguro’s telling of children who are raised at the Hailsham school—hidden away from all of society because of a morbid destiny (one they are all aware of)— is told in a quiet manner.  There isn’t any intense action or alot of extreme emotion, but it haunted me for days afterward.

Just say no to McBusty

3. MOST DISAPPOINTING READ (YA)

Don’t lynch me for this but…I hated Vampire Academy. I can go on for days about how much I despised Rose.  She was a gigantor a-hole.  I get that she’s supposed to protect her sweet, innocent vamp of a BFF Lisa, I get that she hates being at the school, I get that she doesn’t work well with authority, but does she have to be such a ginormous beeotch?  Oh and does she need to talk about her gorgeous swishy hair and huge rack ALL THE TIME?  So far she’s everything most women hate: a beeotch with big boobs who knows she’s hot and uses her looks to manipulate men and get what she wants.  Um sure…what’s not to like?  And then there’s Dimitri.  I dig the Russian accent and normally am totally into forbidden love; but it totally grosses me out that a) He has a man pony (didn’t these go out of style with men who wear vests and no shirt underneath?)  and b) he’s her teacher.  How disgusting is that?  Maybe I feel that way because my husband is a teacher or maybe I feel that way because I’m not an insane pervert.  I don’t know.  Is it just me?  Now, I know lots of people love these books and I’m not criticizing them or their author, Richelle Mead, who has obviously tapped into something many people love.  I’m just not one of them (and I read the first two books and skimmed the third, so I feel I gave them a fair shot).

The Girl With the Dragon Tattoo by Stieg Larsson.  I know!  I’m cringing as I type it.  How could I dislike this book?  I have no explanation except that it didn’t grab me from the start the way I was hoping it would.  I do plan on giving it another try though because I never finished it (or got beyond my 50 page rule).  Its sheer volume of fans tells me I need to give it another go soon, but my heart tells me…meh.  Maybe later.

Read this book or Katsa may kill you

5.  MOST SURPRISING READ (in a good way)

Graceling by Kristin Cashore.  Definitely.  This was a book I’d heard good things about through online reviews, but in truth, the premise didn’t seem like my kind of thing.  It didn’t sound bad, just OK.  But I swear on Stephenie Meyers’s thesaurus, I was wrong.  Graceling was awesome.  It took me to a magical world where there are people who have gifts—or graces— that give them certain abilities.  Not everyone is graced but the heroine,  Katsa’s gift is so bad assy that King Leck ( a Mister Evilpants) has taken her into his court to be his assassin. This story has a great balance of strong characters, interesting plotlines (I was totally engrossed) and good swoon (and steam, which, you know, is OK with me too).

If I Stay by Gayle Foreman.  I think I made it clear here, I love this book.  Everything about it is perfect and the cover is no exception.  The mega nerd in me struggles with the fact that Mia is supposed to have brown eyes and not blue (I know. I should NOT have admitted that because you thought I was so cool before) but really, it’s gorgeous either way.

Honorable Mention:  I’m not sure this counts since this cover wasn’t released in the US, but the German version of The Disreputable History of Frankie Landau Banks is to die for.

This is a tough one.  First off I’d have to say anything by Sarah Dessen.  This year I picked up The Truth About Forever and fell in love, not only with the characters (OK, with Wes) but with Dessen’s distinct, simple style.  After that I tore through all of her other books and am eagerly awaiting anything new (her latest comes out May 2011). 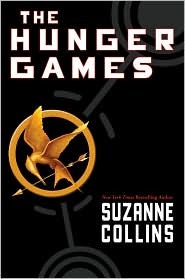 The second, most glaringly obvious answer would have to be The Hunger Games. I used to see this book on the Barnes and Noble shelves and be all, “Kids fighting to the death?  Where’s the swooniness? No thanks.” Obviously I was wrong to the nth degree because holy shizzo that book is loaded with action, emotion and love.  Katniss is a butt kicker, Gale is yummy and Peeta is so sweet I just want to make him some cookies.  Suzanne Collins created a book that is impossible to put down. How did I go nearly two years without entering her world,  snubbing it as I walked past it at the bookstore?

Dog, I love this cover too

This one was easy.  The Disreputable History of Frankie Landau Banks by E. Lockhart.  Vee is currently working on a review of this one, but she’s laughing so hard she can’t even write.  Alright, so that may be a teensy exaggeration but my friends, this book is the best girl power story without being an inyourface political statement.  It’s just fun.  Not heavy.  Not sad.  It tells the tale of Frankie (did you see that one coming?), her life at boarding school and the all-boys secret society she infiltrates (the exclusion of the fairer sex doesn’t sit well with Frankie, who isn’t so much a tried and true feminist as she is unhappy about being left out of the fun).

Couldn't wait for this

No brainer.  Mockingjay. I wanted to throw my computer across the room when I realized I had months to wait until the final installment of the Hunger Games trilogy was to be released.  Normally, I try to wait until every book in a series is released ( it was pure torture waiting for every Princess Diaries book to come out and during my wait for Breaking Dawn I think my husband may have considered divorcing me) because I CAN NOT WAIT without dissecting every detail of the previous books and discussing them with whomever might be near (my husband, my children, random people in bookstores who so much as glance at me).  So waiting for Mockingjay was bad because I was convinced that Suzanne Collins would kill off my beloved Gale and end the love triangle without Katniss having to make a choice (you know that’s what this series is about right?  It’s a sweeping love story.  Or not).  I won’t say what happens, in case you haven’t read it, but although it wasn’t the way I would have liked the story to end, I was engrossed and therefore not let down.

But, I mean, there were others too.  Frankie Landau Banks, Katniss Everdeen, Taylor Markham, Mia from If I Stay ( and Adam! can’t believe I forgot him!).  In all seriousness, there we so many strong, interesting female protagonists with stories that inspired me and made me laugh.  The Bellas of YA novels were few and far between.  And that was good to see.

And now we have a new year to look forward to.  Happy reading to all!