Past Perfect by Leila Sales 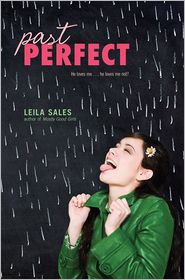 Adorable Cover. It makes me really want this jacket.

All Chelsea wants to do this summer is hang out with her best friend, hone her talents as an ice cream connoisseur, and finally get over Ezra, the boy who broke her heart. But when Chelsea shows up for her summer job at Essex Historical Colonial Village (yes, really), it turns out Ezra’s working there too. Which makes moving on and forgetting Ezra a lot more complicated…even when Chelsea starts falling for someone new.

Maybe Chelsea should have known better than to think that a historical reenactment village could help her escape her past. But with Ezra all too present, and her new crush seeming all too off limits, all Chelsea knows is that she’s got a lot to figure out about love. Because those who don’t learn from the past are doomed to repeat it….  (Goodreads)

The Story: Chelsea has practically grown up at Essex Historical Colonial Village.  Her parents work there and she has spent every summer for as long as she can remember wearing colonial garb and getting her history on.

This summer, she has big plans. Oh yeah ladies.  There’ll be no more colonial nonsense for Chelsea.  She is going to escape the heat and the annoying tourist’s questions by working at… THE MALL. Laugh if you will but this sounds like heaven to Chelsea—being within the air-conditioned stores and hanging out in the food court with her best friend, Fiona.  But there’s a tiny problem: Fiona backs out of the mall plan and both girls end up working at Essex along with all the other history nerds and with Chelsea’s ex-boyfriend Ezra.  The one she isn’t completely over.

In a funny, Romeo and Juliet-ish way, Chelsea falls for Dave, a guy who works across the road.  This is a major problem because he works for Civil War Renactmentland and they are Enemy Numero Uno.  Like, there’s no way to respect them. They’re farbs. (That’s nerd for Far Be It From Authentic). There’s a pretty brutal war that rages every summer between the teenagers of Essex and those  from Renactmentland. It’s serious business with a ton of hate spewing, awesome pranks and overall bitter discord which all = hilarious.  And the kids at Essex have nominated Chelsea as a Lieutenant in their little history war, which makes her flirtation with Dave seem all the more risky.

I absolutely love Leila Sales. Her sense of humor and her overall writing style speak to me on such an awesomely dorky level (this is a compliment, I assure you).  She completely understands what it is to be a normal girl (meaning, not someone who’s going to save their whole town, or fall in love with a wolf, or find out she’s an angel).  Her characters are quirky and loveable and it’s so easy to see yourself or people you know in each of them. Also, in this book she uses history not only in a comical way, but to help her characters measure themselves and grow from the past.

Like Mostly Good Girls, Past Perfect is full of funny moments (like pretty much every time she describes her father and his rhetorical questions I wanted to die laughing) and sweetness.  I LOVED Chelsea.  She was hilarious.  Her relationship with Fiona was perfect—like any conversation you would have had with your high school bestie—and her moments with Dave had just the right balance of cute awkwardness and swoon.  He was ridiculously adorable.  Also, the nerds.  How can I not mention the nerds?  The kids at Essex are history buffs (something I relate to since I’m married to an eighth grade history teacher and let me tell you, between his history love and my book obsession it is Nerd City over here).  Some of them are the cool nerds. Some are the dorkiest of nerds. But they all get their geek on for historical accuracy which means that they’re all, in a word, awesome.

Crush Intensity: 4.5/5 Leila Sales is perfect. I’m already dying for her to write a new book!

Special thanks to Simon & Schuster for offering me an e-galley of this book!

13 thoughts on “Past Perfect”