Spring Valley’s golden girl is found floating face-down in her boyfriend’s pool, hands bound behind her back, head bleeding, drugs and alcohol in her system. Her friends are the only suspects—and they all have reasons to want her dead. Everyone has an alibi, but no one is innocent.

Alibi is a series of four novels, each from the perspective of a particular player in the events leading to the murder of the perfect, all American girl, Abby.  In a very Sunset Boulevardish way, Abby is found dead floating in the pool of her boyfriend’s family home after a night of mega drama and soapiness.

Let’s start at the beginning, with Charles.

Book One, Charles, was written by Annie Miles

Charles is a hot Aussie living in So Cal with his cousin, Mason, and family.  Charles is sexy and swarmy in an I-like-you-despite-the-fact-that-you’ve-probably-poked-your-p-in-way-too-many-places sort of way. He’s completely taken with Mason’s girlfriend, Abby.  It probably doesn’t help matters that he really hates Mason, but Charles is stuck.  He left Australia for a reason–a possibly dark reason and if he wants to come to California and get it on with his cousin’s girlfriend, then so be it! 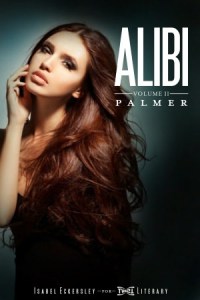 Here’s where we meet Palmer.  Palmer is that girl from the wrong side of the tracks.  Her mama raised her around a bar and she may or may not have gotten her slut on with several guys at school.  Of course, she’s mega hot and has attracted the attention of…wait for it…Charles.  The weird thing is that even though she’s definitely into Charles, she’s also got some weird interest in Mason. It gives me the shivers in a very bad way.

Mason, oh, Mason, he’s quite the douchebag extraordinaire.  I mean can you blame him? His perfect girlfriend is way too into him (and, um, Charles), his cousin can bench press more than him and his parents just don’t seem to really wuv him enough! So you can understand why he cheats on Abby, takes her for granted and why he’s experiencing some roid rage. Or not. Jerky as he sounds, does all of that mean he’d kill Abby? I don’t know. I mean, I know, but I’m just sayin.

And finally we get to Rowan. Rowan, Rowan, Rowan.  She’s an odd, bird-like creature with a fixation on Charles (yes, that’s three girls in the story and they all want Charles to suck their faces off). She buddies up to Mason—who knows why since he’s a huge tool—and gets him involved in some highly questionable activities.  She’s Abby’s best friend, so I’m sure she means well. Ahem.

I have to be honest, within the first pages of this series I was pretty hooked.  Yes, it comes across like a teen soap and yes, these people are all too incredibly sexy hot to be real, and more than once I asked “WHERE IN THE HECK ARE YOUR PARENTS?????” , but seriously, this felt like some combo of Pretty Little Liars and, like, Dynasty for teens (Wow, I really said that.  If I told you that show was on when I was a really little kid would that be better or worse?). The characters ranged from slimy (oh Charles, I wonder if I would have fallen prey to your strangely attractive sleaziness.  It must be the accent) to the downright creepy (I’m talking to you, Rowan). And the mystery is pretty intriguing.

I liked that each novel is told from a different perspective. The same events take place, each giving more back story and insight into the actual murder.  The individual books are short, but aren’t necessarily a complete story unto themselves.  You need to read them all to get the full feel of it.  And you’ll want to. They’re pretty addictive.

Crush Intensity– 3.75/5 Guilty Pleasure! It’s not something I’d read over and over again, but I was surprised at how much I looked forward to reading the next chapter.  And I saw the draw of Charles. I probably would have acted like I hated him in high school all while secretly lusting him.

Alibi is available in e-book format through Amazon and Barnes and Noble.