Today, the blog tour for Enchanted  by Alethea Kontis is making a stop here at YA Crush. I love it when friends come to visit!    And I’m so happy to have the opportunity to blab about this book.  Check it out:

Isn’t this a gorgeous cover? Love it.

It isn’t easy being the rather overlooked and unhappy youngest sibling to sisters named for the other six days of the week. Sunday’s only comfort is writing stories, although what she writes has a terrible tendency to come true.

When Sunday meets an enchanted frog who asks about her stories, the two become friends. Soon that friendship deepens into something magical. One night Sunday kisses her frog goodbye and leaves, not realizing that her love has transformed him back into Rumbold, the crown prince of Arilland—and a man Sunday’s family despises.

The prince returns to his castle, intent on making Sunday fall in love with him as the man he is, not the frog he was. But Sunday is not so easy to woo. How can she feel such a strange, strong attraction for this prince she barely knows? And what twisted secrets lie hidden in his past – and hers? (Goodreads)

Sunday Woodcutter, so named because she is the seventh daughter of Jack and Seven Woodcutter, has a bit of magic.  She’s the often overlooked youngest sibling and seems to find true joy only when she’s writing.  She writes about her family—their adventures, their history, their pain—but she must be very careful because everything she writes comes true. That’s where the magic comes in.  And it never quite works out the ways hopes, so Sunday sticks to writing about things that have already come to pass.  It’s safer that way.

While in the forest, Sunday encounters an enchanted frog named Grumble. Clearly he was once a young man, but Grumble seems to be having difficulty remembering much about his human life.  He enjoys Sunday’s company, especially the stories about her odd family.  The two become friends and through Sunday’s journal, Grumble learns about the Woodcutter family, about Sunday’s other sisters and about her older brother, Jack, who was put to death by the awful young prince who heir to the throne of Arilland.  In her growing fondness for Grumble, Sunday kisses him, hoping to release him from his spell.  Little does she know that Grumble is actually Price Rumbold, the man her family blames for the death of Jack.  But when Sunday kisses Grumble..well, nothing much seems to happen.  She returns to the forest in the days to follow, but her friend is no longer there.  She longs to see him because, frog or not, Sunday loves him.

Prince Rumbold returns to his castle confident of his love for Sunday. He longs to be with her, but he knows he must become a man who is truly worthy of her.  His father agrees to host three balls to aid the prince in the search for a bride.  Rumbold hopes to find Sunday there, to enchant her now as a man, a man who loves her and who longs to spend his life with  her.

Hello Cinderella, right?  It’s all so sweet and swoony.

I thought this book was absolutely wonderful.  I am a total sucker for fairy tales. Bring on the spells and the enchantments, the love, the princes and the oodles of crazy family issues. I love it all.

Enchanted is somewhat of a fairy tale cocktail.  It takes inspiration from other tales such as The Frog Prince and Cinderella, among others, without actually being a retelling of any particular one. This story is truly its own, with rich descriptions of the entire Woodcutter family, their quirks and the odd ways they show love, coupled with the charming romance between a true prince and a shining heroine.  Sunday is a girl who loves her strange family, but yearns for something else.  Rumbold is a man who has finally found purpose in his love for Sunday, but has to overcome the hurdles of his past to make a life with her.  Beyond Sunday and Rumbold are many characters with fantastic storylines (it would be great to see Kontis explore them in future books), and despite their differences, familial love and devotion play a big part in this book.

From the first lines I was drawn in, feeling it was reminiscent of  Ella Enchanted and The Princess and the Frog (other books that took inspiration from fairy tales, but always maintained their own identity).  The sheer volume of characters was daunting at times, but eventually I got it straight. I would have loved a teensy bit more development between Sunday and Grumble, but later, the moments between Rumbold and Sunday were so compelling and sweet that they more than made up for it.

“Yes, she was pretty, but so were many of the women that had paraded themselves before him that evening. Something beyond pretty radiated from inside Sunday.  The folds of her dress called to him, the curve of her wrist beckoned, the silver pins scattered through her hair winked in invitation. She was so beautiful. He wanted to tell he so every day for the rest of his life. Starting tonight.”

Crush Intensity: 4.5/5 If you love fairy tales you will adore this book. I’m looking forward to reading it again! 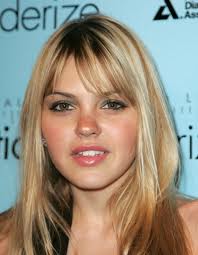 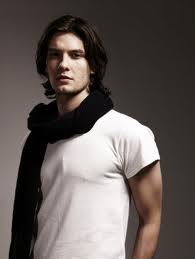 You guys, look at this picture of Alethea.

Doesn’t she look like a princess?  Well, for a princess, she’s awfully busy writing (like Sunday!).  She has written a few children’s books and some short stories, but Enchanted is her debut young adult novel. Also, outside of her wonderful writing, Alethea is also quite funny (just visit her website and you’ll see what I’m talking about).

Here’s a bit of her bio, taken directly from her website:

New York Times bestselling author Alethea Kontis is a princess, a goddess, a force of nature, and a mess. She’s known for screwing up the alphabet, scolding vampire hunters, turning garden gnomes into mad scientists, and making sense out of fairy tales.

Thank you to Net Galley and Harcourt Publishers for giving me an e-galley of Enchanted.  And especially thank you to Alethea Kontis for asking me not only to read her lovely book, but to participate in her blog tour.  I’m looking forward to reading much more from her in the future!