Meant To Be by Lauren Morrill 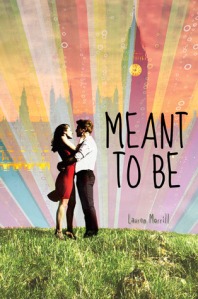 It’s one thing to fall head over heels into a puddle of hazelnut coffee, and quite another to fall for the—gasp—wrong guy. Straight-A junior Julia may be accident prone, but she’s queen of following rules and being prepared. That’s why she keeps a pencil sharpener in her purse and a pocket Shakespeare in her, well, pocket. And that’s also why she’s chosen Mark Bixford, her childhood crush, as her MTB (“meant to be”).But this spring break, Julia’s rules are about to get defenestrated (SAT word: to be thrown from a window) when she’s partnered with her personal nemesis, class-clown Jason, on a school trip to London. After one wild party, Julia starts receiving romantic texts . . . from an unknown number! Jason promises to help discover the identity of her mysterious new suitor if she agrees to break a few rules along the way. And thus begins a wild goose chase through London, leading Julia closer and closer to the biggest surprise of all: true love.Because sometimes the things you least expect are the most meant to be. (Goodreads)

Julia is that awkward, cute girl who knows exactly what she wants, believes in destiny and she most assuredly doe not break the rules ( I hear ya,  Julia. Rule follower here).

On a ten-day trip to London (dream vacation) with her English Lit class—sans BFF and gigantic meant to be crush, Mark, who hardly knows she exists—Julia is buddied up with one Jason Lippencott, cute and annoying class clown.  After getting Julia to break a few rules (Curfew! Party shenanigans with total strangers! Drinking!), Julia begins receiving mysterious texts from some guy she met while slightly intoxicated at a party. She can’t remember the guy, but Jason agrees to help her with wooing him if she agrees to loosen up and live a little.

This book is SO up my alley.  Let me tell you why in list form (yay!).

1. An adorable, nerd protagonist who is clumsy, uptight and annoying. You guys, she is so my people.

2. Multiple book references because hello #1, Julia is a bookworm. She is even called Book Licker, a term I swear Vee and I made up about five years ago. I’m just sayin.

3. London- Could there be a better book location?  I think not. I love the descriptions of each place the class visits, and Julia’s blind love for this town. It’s all connected to her belief in the romance of her mom and dad, London being the place where it all began for them.

4. Meant to Be- The idea that we all have this one soul mate, a person destined to belong only to us. Julia is obsessed with this notion and I so completely relate to this need she has to romanticize all things. Of course, life never brings exactly what you expect, and reality is far better than fantasy. But fate, destiny, meant to be, it’s all so very Tom Hanks and Meg Ryan. How can you not love that?

5. Banter- Oh, witty banter, how you slay me with your funny jokes and sly flirting.  Julia and Jason have awesome, bratty convos. One minute they’re fast friends and the next they’re fighting. So they’re kind of like a real couple in love. But they don’t know that.  Jason so obviously likes Julia but girlfriend is so blinded by her quest for her Meant to Be that she just can’t see it.

Morrill’s writing style is cute and fresh. I felt like she knew me as a teenage girl. Her characters are fun, her descriptions leap off the page and her book felt like talking to an old friend (about a crush in high school, which hasn’t happened in about a billi0n years, but yeah).

Thank you to Random House for sending copies of Meant to Be to all of the blogs in our Selective Collective group!

3 thoughts on “Meant To Be”