Top Ten Tuesday is hosted by The Broke and The Bookish.

It’s been a while since I’ve participated, I know. But this week is a freebie topic, so what better time to discuss my favorite book boyfriend ever (though there are many I love) than today?

Michael Moscovitz of The Princess Diaries series is hands down my ultimate book boyfriend and no one, outside of my hubby, will ever compare. In fact, I have a confession to make: when I read articles or reviews where other women profess their undying love for him I giggle and agree with them, but in my head I think he belongs to me alone. Because he does.

I can’t believe I just admitted that…moving on.

So let’s get to it. Be warned, if you have not finished this series, there are many spoilers here.

1.He’s smart– In the early books, as we get to know Michael, we find out that he’s a genius. He’s in the computer club, he tutors Mia in Algebra, he makes her a Segway Human Transporter, and later, he goes to Japan to work on a robotic arm. The one he invented, because he’s the smartest boy in the world.  And we all know that smart= supremely hot.

2. He’s in a band- Though they eventually part ways because of college and other issues, Michael is in a band where he plays guitar and writes his own music. He even kind of flirts with Mia before they’re going out and tries to hint that he likes her by playing a song about a tall pretty girl who doesn’t know he loves her. (I KNOW!). And later, when they’re dating, Michael’s band, Skinner Box, plays her a song at school for her birthday and it’s called, wait for it, Princess of My Heart. I would have been in a puddle. Right there. Me. On the floor. 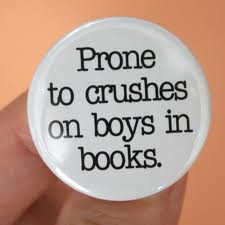 3. Michael is not super-clingy– Initially, Michael and Mia are friends. In fact, as the brother of her BFF, he’s one of her best friends. He sits at lunch with her sometimes, but not always. In fact, even when they start dating, Michael isn’t that guy who has to be with her every moment. He still eats with his Computer Club some days, he doesn’t care when she has princess responsibilities or things to do with her friends. He realizes that they can be together and have their own lives. I love this about him because it shows how secure he is.

4. He gets that Mia can freak out– I mean first, she has no clue he likes her, then she sends him these secret admirer cards with chocolate dipped strawberries on them, and later, even though they’re dating, she thinks he only loves her as friends. We won’t even get into the sexy dance or the Judith Gershner fiasco. Mia is young and a little prone to freak outs. She does kooky things. But Michael knows that playing with her little brother soothes her. Michael knows the smell of his neck (Tide and Ivory soap) makes Mia feel better. He doesn’t think she’s weird or a freak. Even more, he realizes that Mia doesn’t always see her awesomeness clearly. Michael sees it all; he gets it, and he loves her for it.

5. He’s mature– Michael is very sensible. He’s responsible. He, unlike his beloved girlfriend, is not prone to moments of pure spazziness. He sees how totally nuts her life is, what a circus Mia’s family can be, and he just goes with the flow, takes it all in stride. Her grandmother gets a busboy fired at Mia’s birthday dinner and causes a city-wide strike? No big deal. His sister is  now cheating on her boyfriend at Mia’s birthday party with said busboy? Bring on the Cheetos.  Michael doesn’t let it get to him. He is a solid force in Mia’s life. And later, when things get sticky, Michael isn’t dramatic about it all. He considers Mia, what’s best for her, and does the right thing even when it’s difficult for both of them.

6. He loves Star Wars– There is no more I can say about a man who not only loves Star Wars, but quotes it with his girlfriend. I would have been sold on this alone.

This is kind of how I picture adult Michael. And I’m so OK with that.

7. The Looks– Mia describes Michael as the third-hottest guy in school. I don’t know if fellow students actually think he’s hot , other than the fact that Mia and Tina discuss his cuteness a few times. I do know this: his hair is a tiny bit too long because he never has time to cut it, it’s dark and a little curly, and he has dark brown eyes. Hello, gorgeous, right? Also, we do know that when Michael appears in the final book, he’s bulked up a bit and even Trisha and Lana think he’s crazy hot. They even compare him to Christian Bale from Batman. We saw it all along though, I’m just sayin.

8. He’s Supportive– Michael is a secure guy. If Mia has to go to a princess function and their date is canceled, he’s cool. He’ll plan something else for them. If Mia is being given a guilt trip by Lilly about the excesses of her family’s wealth, he tells Lilly to shut up  and then spouts off statistics about Genovia being one of the best places to live in the world. He’s the one who helps her figure out she wants to be a writer, he’s the first to read her manuscript, he’s the guy who encourages her to go to Sarah Lawrence. Michael makes it clear he believes in Mia and supports her in this crazy life she leads.

9. He’s Forward– Michael knew she was dating Kenny (he wasn’t Kenneth yet), but he still created that computer program for her. He knew she was uncomfortable and insecure, especially when the sex talks started coming up and he told her straight out: you’re the girl I want to be with. And that boy meant FOREVER. And later, when she was with JP, he wasted no time letting Mia know how he felt about her. He flirted with her, he sent a robotic arm to Genovia to help in her father’s election, and though Mia tried to make it a friendly thing, he made sure she knew it wasn’t mere friendship that was on his mind. Michael never, at any time in the series, let there be a doubt about his feelings for Mia.

10. He created a robotic arm to prove to the world that he was worthy of dating her- And yeah, sure, it was to his own benefit and it was this amazing thing that was such an advancement for heart surgeons and their patients. BUT HE MADE IT BECAUSE HE LOVED HER.

11. He saved her snowflake necklace- I loved this part of the story. It showed that it meant something to him and that he hoped one day to give it back to her.

I really could go on. But I won’t. I’ve solidified my geek status today.

If you haven’t already, go out and read a PD book and fall in love with Michael today (just remember that I loved him first). Sigh.