My daughter asked me to read The Giver by Lois Lowry, one of her favorite books,  sometime last year. Of course, I loved it. It goes without saying then that I was so excited to finally see it on the big screen. Like any other fan, I watched the trailer over and over, watched every featurette, and scoured the internet for images from the film long before the release date.

We went to see it opening day (and ran into tons of kids from our school) and while there were some slight changes, and maybe a thing or two I would have done differently, I have to say, all four of us really, really loved it. In fact, virtually everyone we know who is a fan of the book that saw the film was very pleased.  So I’m not really understanding the criticism or why it hasn’t done well at the box office. With the kind of following those book have, I’m surprised.

Now, I understand that the book is always, always better than the movie. There’s no question about that. No one can match what’s in our own minds, no one can look or speak or react in the same way our brain dictates. But in this case I felt Jeff Bridges, who labored for years to make this film, made it with love and respect for the story and characters the fans hold dear.

The main issues I hear people griping about are:

1. Jonas’s Age- So, in the book he’s twelve. In the film he’s sixteen. I don’t know the reason for this change. I absolutely believe the story itself has a greater impact when it’s a twelve year-old who takes on the burdens Jonas does. BUT. Sixteen year old Jonas is not like every other sixteen year old you or I know. He is all innocence. In fact, Brenton Thwaites captures that wide-eyed sweetness so well. To me, he looked exactly as I pictured Jonas, only older. I totally freaked out when he was cast, too. I mean, he was way too old, right? Esoecially considering Twaites was twenty-four when he was cast! But I had a year to get over it. It’s not as though it was a surprise going in. And with time and with the images I saw, and finally, the film, he seemed like an excellent choice considering they’d decided to go with a teenage Jonas. Would I have preferred a twelve year-old? Definitely. But it did not make or break the film for me. What everything hinged on was Jonas, who he was, what he was willing to do, and the fact that he–still a child, especially when you consider his upbringing and naiveté concerning the world–was willing to go to the lengths he did.

2. The Love Story-  I am so sick of hearing this! We know that in the book, Jonas started having dreams and thoughts about Fiona, which he recalled led him to having to start taking his pills. His parents referred to these feelings as “The Stirrings” and assured him it was normal. Had Jonas been twelve in the film I think it would have made sense to leave it there. But he’s sixteen (see item #1). He’s not taking his injections (vs. pills in the book). It’s only natural that he develops an attraction to Fiona. Would I call it romantic love? No. It was the beginning of something. It was curiosity, and considering his age, it was far more authentic to do that than to ignore that hormonally and emotionally he was going to experience changes. If it was possible for him to feel love for Gabe or Giver, it was also possible for him to feel something–attraction, attachment, stirrings–for Fiona.

3. Meryl Streep’s Character Was Way Bigger- I have no issue with this. It makes sense to identify the evil and the control with one individual than with some ominous but vague threat. Also, when you’ve got Meryl Streep in a movie you capitalize on it.

4. Been There Done That- This is the complaint that I struggle with most. Yes, we’ve seen YA dystopic worlds successfully turned into films in recent years. And we’ve seen legions of excellent (and not so excellent) book series that are all doom and gloom societies where it’s essential that one unlikely teen prevail over evil for the good of all. And yet Lowry was pretty much the YA writer from whom such ideas originated. Everyone, in some way stole from her genius, if only a little. So let’s give credit where credit is due. Maybe this movie took too long to make it to the screen, maybe not, but a strong story is timeless. It’s always good.

1. Jeff Bridges as Giver- Simply put, there could not have been a better man to play him. It’s been said that when he bought the rights to this book he envisioned his father playing Giver, and with all due respect to his father, I think Bridges was perfect. 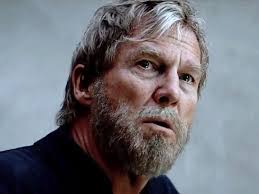 2. The Memories- I loved the imagery used, especially when Giver seeks to give Jonas strength for what he’s about to do. I’m not going to lie; I got choked up.

3. Jonas- As I said above, I think Brenton Thwaites captured the heart of Jonas. He has great moments with Giver, with Gabe, and with Fiona.

4. Love- The scene where Jonas asks his father if he loves him. I really liked his father’s reaction (“I enjoy you”) and his mother’s reaction(which, honestly, it’s been a while. I don’t remember if it’s in the book), calling love “a word so antiquated it’s lost all meaning.” And I loved that he finally experienced love with Giver and with Gabe. 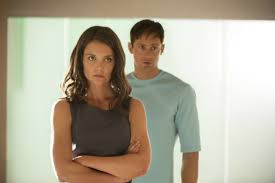 5. The End- I struggled with the end of the book because it was so ambiguous. Did they live? Did they die? Was it all some weird plan of Giver? Who knows? I didn’t know until the THIRD BOOK that Jonas and Gabe both survived.  I think the simple ending of the film still left it with clarity without truly changing the outcome.

As a fan of the book series, I really enjoyed this movie. Later this week we’ll discuss the film version of If I Stay.

3 thoughts on “Film Talk: The Giver”