The One by Kiera Cass (The Selection #3) 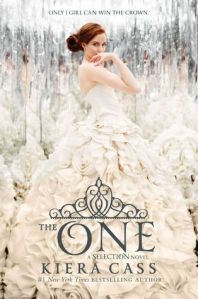 The time has come for one winner to be crowned.

When she was chosen to compete in the Selection, America never dreamed she would find herself anywhere close to the crown—or to Prince Maxon’s heart. But as the end of the competition approaches, and the threats outside the palace walls grow more vicious, America realizes just how much she stands to lose—and how hard she’ll have to fight for the future she wants. (Goodreads)

This is the final book in The Selection series. If you have not read The Selection, or The Elite, you should do so immediately. There are spoilers ahead. And you don’t want to do that! You hate spoilers as much as I do, come on.

This book picks up right after The Elite. In that book, America, Maxon, and Aspen all pretty much act like idiots. Aspen keeps professing his love for America despite the fact that that ship has sailed, man. America loves Maxon, but wait, she’s jealous because he’s sort of playing the game and getting a little lovey with some of the other girls. And certain incidents involving certain contestants getting hot and heavy with the help put Maxon in the role of Bad Guy Who Has to Punish Them. So, it makes sense that America, in her horror over the whole drama, starts to secretly make out with Aspen. I know. What the what? Aspen is creepy. I hated him in that book. And the secret makeouts made me hate America (but I loved that book).

Now, in book three, America has realized her wrongs and she wants to get back in the game with Maxon. She really does love him and…shocker, he loves her too. Any idiot can see that. Papa Maxon (otherwise known as The King) causes some problems because he really hates America and her sassy ways, but Maxon seems pretty devoted. Still, the Selection hasn’t actually been made official yet, so America always wonders about her place. To make matters worse, there are more attacks on the palace and in outlying areas. It begins to feel like even if America wins the Selection and the heart of Maxon, she’ll never truly have her happy ending because there is such unrest and unfairness in the way the caste system is set up.

I enjoyed this book mostly because it was so good to finally get closure. We learn Maxon’s true heart, and we see his final choice. We get to see even more depth as to how difficult it is for him to stand up to his father, and we see even more of what a terrible man the king is. We also learn more about the palace attacks and both the groups trying to plan them, and those trying to stop them. This is an interesting part of the story and I wish there had been more to it. I felt it was built up over the course of the series, and while the story was good, I would have been happy with more.

I’m also happy to say that I really, really liked Aspen in the end. He had a good story and ended up being a great guy. There are actually a few people in this series I was prepared to hate who surprised me in the end. That was refreshing. Ultimately though, there were some good, good moments with Maxon.

I enjoyed this book, but I was also happy to see it all come to a close. It felt a tiny bit like these characters, as much as I enjoyed them and their story, were overstaying their welcome just a teensy bit.

Crush Intensity: 4.0/5 Slow start but a nice, happy ending tied up with a bow. For those who want the story to continue, it does. The Heir is coming out in May.