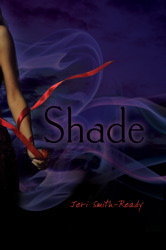 Ignore this cover. It's a good book, I swear.

With Logan’s band playing a critical gig and Aura’s plans for an intimate after-party, Aura knows it will be the most memorable night of her boyfriend’s life. She never thought it would be his last.

Like everyone born after the Shift, Aura can see and hear ghosts. This mysterious ability has always been annoying, and Aura had wanted nothing more than to figure out why the Shift happened so she can undo it. But not with Logan’s violet-hued spirit still hanging around. Because dead Logan is almost as real as ever. Almost.

It doesn’t help that Aura’s new friend Zachary is so understanding—and so very alive. His support means more to Aura than she cares to admit.

As Aura’s relationships with the dead and the living grow ever complicated, so do her feelings for Logan and Zachary. Each holds a piece of Aura’s heart…and clues to the secret of the Shift.

Aura’s dreamy boyfriend Logan OD’s the night they’re supposed to let their hair down and …well, you know.  He leaves the room to take a shower after experiencing an embarrassing “problem” (maybe he’s never watched those lame ads I see every single time my kids and I are watching sports with the hubs.  Be ready when the time is right…) and returns as a ghost.  Obviously Aura is a little unhappy about this.  As with all who die unexpectedly, Logan remains in an afterlife that lingers somewhere between the living world and the Great Beyond and this gives him plenty of time to follow Aura around.

Aura was born after an event called The Shift.  No one really knows what caused it, but anyone born seventeen years ago (or less) has the unfortunate ability to see the ghosts of those who have not yet passed on to a peaceful existence.  In many cases these kids help ghosts testify in court cases against their own murderers or pass on important messages.  Most of the time though,  the post-Shifters just try to avoid them.

I really liked this premise because although it was yet another paranormal book, it tackled ghosts instead of vampires and wolves (and thank you, instead of fairies).  The visual that the author gives of Logan— appearing in a violet hue, wearing the same disheveled clothing he wore the night of his death,  still professing his eternal love for Aura—was vivid and painfully sweet.  Aura still loves and desires Logan and she finds herself in this strange limbo where she’s kind of dating a ghost.

Back in the world of the living and breathing,  Aura has been paired up with Zachary, a new guy in school who hails all the way from Scotland (I know! Accent Alert!).  Of course Zachary is hotness to the billionth degree (seriously, where was this abundance of  attractive transfers in my high school?  I remember not a one, but every book seems to have them) and, like Aura, he’s  interested in studying the Shift.  They take on a research project together and some teensy fireworks ensue. The research opens up a Pandora’s Box of questions and clues about Aura’s past, about the mother who died when she was young and the identity of the father she’s never met. Aura is definitely keeping some secrets from Zachary and the professor overseeing them, but she’s not the only one.

And there’s a problem.  I mean, other than the fact that Aura’s boyfriend is dead but still sleeps beside her in her bed every night.  Logan is in danger of becoming a Shade, which is a dark, dangerous version of a ghost.  If he transforms into one, the authorities (like real Ghostbusters only they ain’t no Bill Murray) will lock his spirit up forever, ruining any chances at him finding eternal peace.  Logan insists he’s fine, but he’s beginning to show signs that he made be turning.

Aura feels torn between Zachary and Logan (though it’s not a cheesy love triangle because her heart clearly only loves one of them).  She is desperate to find out more about the Shift and her family history and she’s beginning to trust Zachary (and maybe have the hots for him too.  It’s the accent, I’m telling you).  On the other hand, she wants to convince Logan to move on, as much as it pains her, because she fears he’ll turn into a Shade otherwise.

I really enjoyed this book.  I liked Aura and both of the male love interests.  What I really loved was the relationship between Logan and Aura.  There was such a genuine sweetness to them and the more I learned about their relationship, the more I related to them.  I truly felt the tragedy of Logan’s death—even though it was his own stupid fault— and my heart went out to both he and Aura.  All the emotion—including the grieving by Aura, Logan and his family— felt true, without being heavy or depressing.   In the beginning of the book, it sounds like a gift to be able to see loved ones who’ve been lost too early in life, but it becomes apparent that in seeing their ghost every day there is the constant reminder of loss and no way to truly let go.

Ok and I’ll be totally honest.  I cried a little.  It wasn’t epic levels of tears like some books of late (I’m talkin ’bout you If I Stay) but it tugged at my heart in a way I wasn’t expecting.

My only complaint is that Jeri Smith-Ready brought up a ton of interesting questions relating to the Shift and to Aura’s mother and left them all unanswered.  I assume they’ll be addressed in the next book, but I would have liked to have known a little more.  In fact, I knew so little about some of the history (especially regarding Aura’s mother and a journal she used to keep) that I’m not even sure what I’m hoping to find out.  But still, I’m intrigued and am looking forward to the sequel, Shift, which comes out in May. 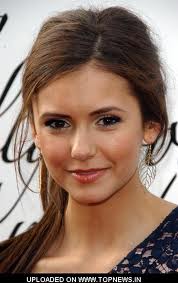 I love Nina Dobrev of The Vampire Diaries. Obviously she is why I watch that show and it has nothing to do with the Salvatores.  It’s all Nina.  I think she embodies that balance of strength and innocence of Aura.  And she’s adorable but can play tough.

Logan is supposed to be a hotty pants.  Aside from being cute, he’s in a band where he just so happens to be the lead singer (Sa-woon!). Also, he may be showing signs of shifting into a Shade (which is like the Dark Side of Shade so in essence he may be getting into his Vaderesque roots.  All things lead to Star Wars my padawan friends).  Because of this, I imagine him as Hayden Christensen. 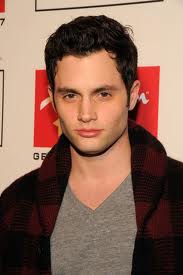 Zachary is another cute one.  He has dark hair (and did I mention the accent?).  He’s an all-around good guy with some interesting secrets and he has some good moments with Aura that would have made me weak in the knees if it wasn’t for Aura’s pesky ghost boyfriend.  Penn Badgley would make a great crushworthy research partner who’d be willing to meet the challenge of competing with a perfectly dreamy ex.

Logan went very still, as if caught in a freeze-frame.  “You said you love me.”

“But you’re leaving me.”

“God this isn’t happening.  It was one thing to lose my life, but this.”  He dragged his hands up his face, into his hair.  “What can I do, Aura?  Tell me what to do.”

“There’s nothing you can do.”