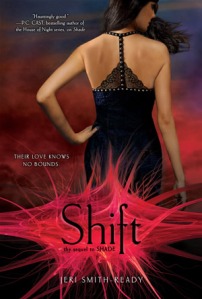 You know when a book is really great but you have to ignore/hide/pretend you didn't see the cover? Do that.

Aura’s life is anything but easy. Her boyfriend, Logan, died, and his slides between ghost and shade have left her reeling. Aura knows he needs her now more than ever. She loves Logan, but she can’t deny her connection with the totally supportive, totally gorgeous Zachary. And she’s not sure that she wants to.

Logan and Zachary will fight to be the one by her side, but Aura needs them both to uncover the mystery of her past—the mystery of the Shift.

As Aura’s search uncovers new truths, she must decide whom to trust with her secrets…and her heart. (Goodreads)

Sometimes you totally love, love, love a book and yet, when the sequel comes around, you totally drag your feet on picking it up because there is no way—no freaking way—that the sequel can be as good. Have you ever had that feeling?  Well, don’t worry, because that DID NOT happen here.  I mean, yes, I dragged my feet about reading this one because little old Logan just about broke my heart in Shade and I found it hard to believe that the next story could compare, but alas, I was wrong (yes, Hubby, you have it in writing. I was wrong…about this).  Shift was so excellent.

The Story: If you haven’t read the first book, look out.  This will get spoilery (it is a word. I’ve decided).

When Shift opens, Logan, Aura’s ghost boyfriend has disappeared because he has turned shade.  If found, the authorities will black box him for all eternity, which is truly a fate worse than his tragic death.  He returns to Aura one night and does the impossible: he changes from shade to ghost.  More mystifying are the few moments when Logan and Aura are able to physically touch. I’ll let you guess what they attempt to do at this time (attempt being the key word.  You just can’t catch a break can you, Logan?).

Logan’s short-lived physical state and his ability to switch between shade and ghost throw Aura into a whirlwind.  She’s confused by her continued love of Logan and this only serves to impede her burgeoning romance with that studly Scotsman, Zachary. It also opens up a whole realm of questions as to whether or not she can have any sort of future with Logan because, you know, he’s kind of dead.  Like dead dead. This causes major tension for Logan and Zach. Zach is incapable of seeing Logan and yet they somehow manage to fight over Aura. Adding to the confusion is the continued mystery of the Shift and how it relates to both Aura and her mother.

You guys, this was a great sequel! It delivers on every point and answers every question left open in Shade.  Aura continues to be a strong, yet conflicted heroine, but in Shift, while my heart ached at her dilemma, she finally finds the direction she should take.  Also, in the previous book, I was such a Logan girl.  Zachary was fine and dandy, but I thought Aura and Logan had such a sweet storyline.  In Shift, we have a chance to get to know Zachary better and he really shines ( I mean, accent alert! Holla!). We also get a chance to see Logan’s younger brother, Dylan, and the complicated relationship that he and Aura now have.

This one is so good.  And also, Swoon City baby!  There are some tingly, to die for moments in this book and that, of course, makes me quite happy.

Crush Intensity: 4.5/5 I think I liked it better than the first. I should probably read it again, you know, to be sure.

Bonus: The third and final book, Shine comes out in May 2012. Here are a couple of teasers.  There is also a PG13-ish spoiler scene on that site too.  If you hunt a bit, you’ll find it.