Pushing the Limits by Katie McGarry

No one knows what happened the night Echo Emerson went from popular girl with jock boyfriend to gossiped-about outsider with “freaky” scars on her arms. Even Echo can’t remember the whole truth of that horrible night. All she knows is that she wants everything to go back to normal.But when Noah Hutchins, the smoking-hot, girl-using loner in the black leather jacket, explodes into her life with his tough attitude and surprising understanding, Echo’s world shifts in ways she could never have imagined. They should have nothing in common. And with the secrets they both keep, being together is pretty much impossible.Yet the crazy attraction between them refuses to go away. And Echo has to ask herself just how far they can push the limits and what she’ll risk for the one guy who might teach her how to love again.(Goodreads)

Echo was once an It Girl.  She was a beautiful, popular artist dating a cute jock (douchebag, cough, cough).  She was part of the in crowd until a horrific attack –by her mother, no less–left Echo physically and emotionally scarred.  While at school she hides; she avoids the cafeteria and attempts to cover the vicious marks on her arms, but she can’t avoid the gossip.

Noah is on the wrong track.  He’s a good guy who’s now a bad boy after being tossed around by different foster families, the first if which abused him.  The thing he loves most in this world are his little brothers. Since their parents’ death, and since Noah took to defending himself against the foster-father who beat him, the boys can only have monitored visitations with him.  Noah is desperate to save them from a fate like his own and is convinced that the only way is to fight for custody of his brothers upon graduation. One problem: Noah spends his days slacking and getting stoned and his nights working a dead-end job at a diner, hoping to hobble together enough money to rent an apartment soon.

Noah and Echo are brought together by their school counselor.  Both are in therapy because of the traumatic events they’ve experienced. And they really couldn’t be more different–but there’s a way they can help each other.  Echo agrees to tutor Noah to make money to fix up the car left to her when her older brother died in Afghanistan because Noah needs to graduate and get his life together for the sake of his brothers. In that sense they’re a perfect fit. And when they get past the initial contempt they have for one another, they hatch a plan to steal their files from their social worker. Oh, and they start to fall for each other.  And man, oh man, it’s so good.

My Take: Sweet Lord, I really liked this book. Hello, there is a super-hot guy AND there’s kissing. This is a win win.  Honestly, it reminded me a bit of Perfect Chemistry (the bad boy and the popular girl thrown together by school). While it sounds like the same old thing at first, trust me, it isn’t.  The way their friendship evolves is so natural. Yes, they have that instant love/hate thing going on, oh and yes, they are immediately attracted to each other, but it’s their deep sense of loss, their mutual understanding as outsiders and survivors that draws them together. The physical attraction is absolutely there and it’s believable and well-written, but this is no case of insta-love. It easily goes beyond the ranks of high school crush while still being grounded in reality by bouts of uncertainty and jealousy.  And there is plenty of steam.  These two, let me tell you, they have some super-sexy chemistry.  I mean, I’m still not entirely sure what happened on page 287 of the paperback, but it was good. Those pages almost melted me.

The book is written from the alternating perspectives of Echo and Noah, which really keeps the story together.  Here we see Echo’s anguish over the repressed memories from the night of her attack; we feel the sadness over the loss of her brother and the pain she deals with daily as she battles her father and stepmother’s expectations for normalcy.  As we come to understand Noah, we see he’s a pretty outstanding guy who’s sort of given up on everything but his little brothers. I really liked both of these characters and their chemistry, but I especially loved Noah. He was awesome and pretty smokin hot.

My only complaint is minor, but I feel I must mention it.  Once Noah and Echo are “official” Noah starts calling Echo “baby.” I’m not anti-pet names or anything, in fact in certain moments it can be cute.  But he’s says it a lot.  I was pretty horrified by this because I felt it came out of nowhere (and NEVER WENT AWAY). Once or twice would have been fine (for example, at one point Noah is teasing Echo about sex and he tells her, “Say the word, baby, and I’ll rock your world.” OK, that’s cute. It’s flirty. Not a problem). But when it reaches the point that Echo no longer has a name other than ‘baby” it gets to be a bit much.

Wow. I didn’t realize I felt so strongly about this issue (that’s a lie. I so did)! I got past it though because holy cow, I loved this book. Read it! 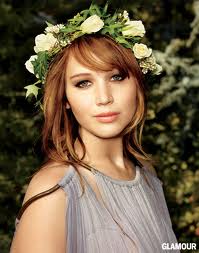 Alright, I’m not going to pretend to know what’s going on in this photo, but I despite the descriptions of Echo having curly hair, I pictured a red-haired Jennifer Lawrence the entire time.

Thank you to Mira Ink for sending me a copy of Pushing The Limits. I loved it!