Ginny Blackstone thought that the biggest adventure of her life was behind her. She spent last summer traveling around Europe, following the tasks her aunt Peg laid out in a series of letters before she died. When someone stole Ginny’s backpack—and the last little blue envelope inside—she resigned herself to never knowing how it was supposed to end.

Months later, a mysterious boy contacts Ginny from London, saying he’s found her bag. Finally, Ginny can finish what she started. But instead of ending her journey, the last letter starts a new adventure—one filled with old friends, new loves, and once-in-a-lifetime experiences. Ginny finds she must hold on to her wits . . . and her heart. This time, there are no instructions. (Goodreads)

The Story: This is a sequel to Thirteen Little Blue Envelopes.  Be warned, if you’ve not read the first book, there will be spoilers! Like, now.

Months after Ginny’s return from Europe, she receives an e-mail from a strange guy in London who claims to have Ginny’s missing letters.  Not only does he have all twelve letters that Aunt Peg used to send Ginny on a crazy, whirlwind tour of Europe, but he has the last letter.  The thirteenth one.  The one she never got to open.  This letter apparently details one last piece of artwork for Ginny to find.

Eager to retrieve her letters,  to see her Uncle Richard and to explore the undefinable thing she has with Keith, she jets off to London over Christmas vacation.  Right away there are two big problems: One, Keith kind of, in a roundabout way, seems to possibly maybe have a girlfriend (seriously!). And second, that mysterious guy, Oliver? Well,  he’s decided to blackmail Ginny since he heard about the art auction from Peg’s other paintings.  He’s basically holding Ginny’s letters for ransom until they find the last piece of art, sell it and split the proceeds(!!!!!!).  Can you say tool?

But Ginny is Ginny.  So undeniably sweet and kind-hearted.  So shy and bold all at once.  She agrees to Oliver’s demands because she wants her letters back and she wants to figure out the last lesson Peg wanted her to learn.   So she agrees to Oliver’s demands and worse, she lets Keith and his girlfriend (seriously!) tag along.  The whole think is as awkward as can be because Ginny still loves Keith. And Keith totally flirts with her (I know!) even though his girlfriend (who I challenge you to dislike. She rocks) is right there.  Oh and the guy who’s blackmailing her? He’s kind of hot (you know, outside of the blackmail thing).

I liked this book better than its predecessor. Ginny is still funny and awkward, but she is slightly more self-assured now.  As always Aunt Peg is a beautiful enigma who, even in her death, loves and inspires Ginny.   This story had a little more charm and left me feeling that although Ginny’s story is over, she continues to live on somewhere, hopefully making her aunt proud.

Crush Intensity: 3.25/5  I liked it.  I probably wouldn’t read it again, but if there were ever more stories about Ginny, I’d pick them up.

All our other casting would stay the same as our previous review, but Tom Sturridge (this version, not the hairy, bearded version) looks exactly as I pictured Oliver. 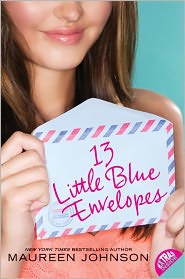 Inside little blue envelope 1 are $1,000 and instructions to buy a plane ticket.

In envelope 2 are directions to a specific London flat.

The note in envelope 3 tells Ginny: Find a starving artist.

Because of envelope 4, Ginny and a playwright/thief/ bloke–about–town called Keith go to Scotland together, with somewhat disastrous–though utterly romantic–results. But will she ever see him again?

Everything about Ginny will change this summer, and it’s all because of the 13 little blue envelopes. (Goodreads)

The Story: Ginny’s Aunt Peg is sending her on an adventure that will take her all the way to Europe—London to be exact.  The money is provided, with the teensiest bit of direction (no phones, no computers, and bring only what will fit into a backpack).  As Ginny reads each letter— in order, after completing the specific tasks in each—she finds out where she’s going next and what she’s supposed to do when she gets there.

The thing is, Aunt Peg died only months earlier.  It was a shock to the whole family.  Suddenly Ginny receives this crazy package and directions all the way from England, and she knows she must take these final steps— the ones her aunt planned for her in her last weeks of life—and discover whatever amazing treasures Aunt Peg hoped for her to find.  On that journey she has to do things like take a plane to a foreign county or find an artistic cause to support. She encounters tons of people, meets a mildly hot guy and delves deeper into the mind of the aunt she loved so dearly.   It scares her, but she does it all for Aunt Peg.  She really isn’t particularly adventurous or brave, but she embraces it all as a way to connect with Peg one last time.

My Take: I had super-high hopes for this one because people seem to love it.  Truthfully, I felt somewhat let down.  I really loved Ginny because I totally related to her cautiousness.  It wasn’t that these things didn’t scare her, but her love for her aunt and her belief in Peg’s love for her (and in her need to share something with Ginny) helped her push past her comfort zone.

While I loved Ginny and her adventures, I had two problems: First, I had a difficult time getting into Keith (the main guy).  He never seemed terribly interested in Ginny, to me at least. I think he was supposed to come across that way, sort of casually interested …but maybe not.  I mean, they live on different continents and Ginny is, as he describes her, his “mad one”, meaning he thinks she kind of off.  I prefer guys who put it out there and Keith just wasn’t that kind of guy.  Also, I had a hard time believing that Ginny’s parents would just let a high school girl jet off on some mysterious trip without a real chaperone, especially one planned by an aunt they viewed as somewhat unreliable.  I got past it, but still, the story never completely soared for me.

Crush Intensity: 3/5  The idea behind Thirteen Little Blue Envelopes is very sweet, it just wasn’t quite what I expected. It’s hard when you’ve heard SO MUCH about a book that it can’t measure up to your expectations.

My ten year-old daughter is obsessed with the Nickelodeon show House of Annubis.  This girl, Nathalia Ramos is the main girl.  I think she’d be a perfect Ginny.

Ethan Peck would be a great Keith. Keith has an awesome Scottish accent AND at times he wears a kilt.  That scores him some points.