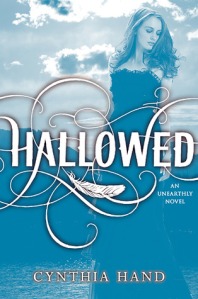 For months part-angel Clara Gardner trained to face the raging forest fire from her visions and rescue the alluring and mysterious Christian Prescott from the blaze. But nothing could prepare her for the fateful decisions she would be forced to make that day, or the startling revelation that her purpose—the task she was put on earth to accomplish—is not as straightforward as she thought.

Now, torn between her increasingly complicated feelings for Christian and her love for her boyfriend, Tucker, Clara struggles to make sense of what she was supposed to do the day of the fire. And, as she is drawn further into the world of part angels and the growing conflict between White Wings and Black Wings, Clara learns of the terrifying new reality that she must face: Someone close to her will die in a matter of months. With her future uncertain, the only thing Clara knows for sure is that the fire was just the beginning. (Goodreads)

Hallowed is the sequel to Unearthly (which I loved).  If you’ve not read the first book be warned. This will be quite the spoilery treat.

So, let’s play a little catch up.  Clara is an angel—not some dark, annoying, I’ve-just-been-tossed-out-of-heaven emo poser, but the real deal. An actual angel on a mission. FROM GOD. The first time I read that I was like sa-weet, a new twist!

Things aren’t particularly perfect for our girl though because after spending months learning about her purpose—saving the ultra-hot Christian—Clara forsakes her mission to save her boyfriend, Tucker (and oh yes, he’s so very worth it).  I wanted her to do this of course, because Cynthia Hand had me at hello, baby. The romance here was so sweet and holy cow, I fell for it all hook, line and sinker, just like Clara.

So, Clara rescues Tucker from a horrible fire instead of saving Christian, only to find out (DUM DUM DUM—that’s my soap opera music) that Christian makes it out alive anyway because he’s an angel and he was trying to save her too, believing that she was his mission as well.

Hallowed picks up immediately after all this blessed awesomeness.  Clara absolutely loves Tucker, but she’s feeling a teensy bit guilty about the whole Christian thing.  In some weird way these two are drawn together now more than ever.  Those feelings continue to intensify as Clara begins to learn more about life as an angel, something Tucker tries but will never truly understand. Things only get worse when Clara begins to have new, ominous visions of a funeral. And the person she goes to for comfort here is …wait for it…Christian.

Oh, love triangles can be so frustrating can’t they?  And Clara can’t see that she’s shutting Tucker out because she’s so sick with worry over whose funeral she’s attending in this creepy vision.  None of this—the worry, the growing attraction to Christian, the deeper attachment she feels to her angelic family—is altogether good for that whole Tucker/Clara situation.

There were things I really liked about this book: Tucker, Clara’s friends, and the basic premise of an angel seeking her calling from God while battling her very human desire to do her own thing.

This time around, however, I didn’t love Clara as much as I previously did.  She’s already wracked with guilt over the whole missed calling thing from the first book, now we add to it her constant worry over who in the heck may be dying in the near future. And I get both of those things. I was with her there.

What was more difficult to swallow was the love triangle.  Both guys are good. I see your dilemma here Clara, I really do. But seriously, will you just make a decision already?????!!!!!!  When she was with Tucker she loved him. Except that she was lusting after Christian (which, you know, was all the time). And man, Christian totally knows it and,  like any guy, he clearly has no problem with it.  He wants her too.  I just wanted Clara to stop already. Or start. Or do something other than what she was doing. And she does—it just feels like forever that she’s contemplating it all.

And while I liked Christian and enjoyed the opportunity to get to know him better, I felt this book was truly lacking one truly spectacular element that its predecessor had: Tucker.  Oh, he’s there, but not enough.  Or maybe I’m over analyzing it all. Who knows? I still enjoyed the book and would recommend it, but honestly I wasn’t swept away like I was the first time around.

Crush Intensity: 3/5 . The third book in the series, Boundless, will be in stores January 2013.

Soundtrack: I’m sticking with the song I chose for the first book.  Run by Snow Patrol. It just fits this series.  I can’t even explain it. 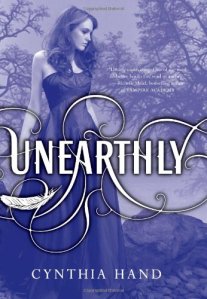 This girl reminds me of Keira Knightley. Is it just me?

Clara Gardner has recently learned that she’s part angel. Having angel blood run through her veins not only makes her smarter, stronger, and faster than humans (a word, she realizes, that no longer applies to her), but it means she has a purpose, something she was put on this earth to do. Figuring out what that is, though, isn’t easy.

Her visions of a raging forest fire and an alluring stranger lead her to a new school in a new town. When she meets Christian, who turns out to be the boy of her dreams (literally), everything seems to fall into place—and out of place at the same time. Because there’s another guy, Tucker, who appeals to Clara’s less angelic side.

As Clara tries to find her way in a world she no longer understands, she encounters unseen dangers and choices she never thought she’d have to make—between honesty and deceit, love and duty, good and evil. When the fire from her vision finally ignites, will Clara be ready to face her destiny? (Goodreads)

Clara has a unique calling.  While she doesn’t know it in great detail, she has a vision—the same one continuously—that gives her clues to her destiny.  This calling takes her all the way from California to Wyoming in search of the boy whose face she knows only from her own mind. The one she’s certain she must rescue.

Clara’s mom is part angel. And Clara, as her daughter, is one quarter angel.  Now, if you think this is another freaking fallen angel story again (I’m sick of them too), think again.  Clara and her mother are guardian angels, each with a distinct job to fulfill.  Their purpose is known only to themselves and only when revealed (by whom?) at the appropriate time.

When Clara finally settles in Wyoming, all is not as simple as it seems.  She finds Christian, the boy from her vision, but she is still unable to connect the pieces from her vision and translate them into waking life. They share a somewhat confusing bond made all the more complicated by the fact that Clara is strangely drawn to Tucker, the somewhat annoying brother of her new friend. Tucker proves to be both exasperating and sweet and he becomes a major distraction from the one guiding thing in Clara’s life—um yeah, her purpose (which is kind of everything).

There is a short list of this sort of book that I actually truly, truly love.  More often, they annoy the shizz out of me.  I’m sorry, but it’s true. Angels have lately felt like such a tired concept.  But Unearthly was in a completely different category.  While there is little talk of God and religion, you get the feeling that these ladies are sent by the Big Guy himself.  They’re guardian angels, but not in a random, do-gooder sort of way. They were created with a distinct purpose,  and special abilities, yet they are part human—with human emotions and needs.  They’re called to put it all on the line to answer when duty calls.

The story is so refreshing because, although it had supernatural elements, much of the book dealt with Clara battling between understanding her calling and fighting her own human desire to follow her heart.  Tucker isn’t supposed to be a part of her plan, but he sort of slips in and he fits blissfully into her human life.  Christian represents her supernatural life and though she has no romantic tie to him, she has a sense of duty.  She should have nothing drawing her to Tucker, yet she is overwhelmed by her desire to be with him.

Crush Intensity: 4.5/5 I really couldn’t put it down. It was so well-written, so engrossing and I never saw the end coming.  I loved it.